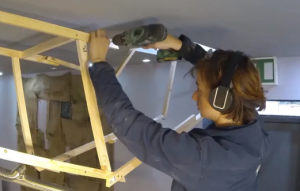 Catriona Robertson was the first funded artist in residence at MERZ in Sanquhar. Cat had been visiting Kurt Schwitters’ MERZ Barn in Elterwater over the last two years and suggested a path from Schwitters’ last work in the UK into the Reconstruction and Fabrication legacy maintained in Sanquhar. During her stay from July to September 2019 Cat made bricks with local kids setting these alongside the Sanquhar bricks in the MERZ yard. Inspired by hats used during the August Riding the Marches Cat ran a hat-making competition with discarded cardboard at the Nithsdale Hotel. 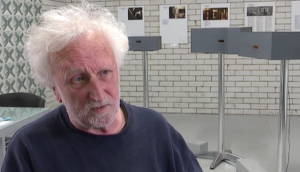 When over in Scotland to film the Sanquhar Arts Festival in May 2019 the Belfast production company and broadcaster NvTv interviewed Dougie Sharpe and David Rushton. Unbeknown to either artist, NvTv had shot enough footage to edit a programme on Dougie and later on David for their ‘Collapse the Box’ series. In this episode David Rushton talks about his reasons for relocating to Sanquhar, for establishing MERZ as a contemporary art gallery with artists residency and for opening a Museum of Model Art.

Ally Wallace was our second Funded Artist in Residence at MERZ, staying from September to November in 2019. In this film Ally outlines the influence of local buildings and textile industries on his research, his approach to working and the final exhibition in the Gallery. The MERZ residencies and this recording are supported by the National Lottery through Creative Scotland. 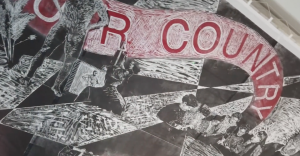 Sarah-Manning Shaw introduces Thomas Kilpper whose print on rubber fills floor and ceiling of Gallery 1 at Castle Mills, the new base of Edinburgh Printmakers. From 27th April till 13th July 2019.